Home » AHP Blog » GROWING UP ON A CENTRAL COAST FARM

GROWING UP ON A CENTRAL COAST FARM

Every May, Ag History holds its best attended event, Day on the Farm, complete with demonstrations and hands-on activities from farm and ranch life in the past.

From the Agricultural History Project Archives, here are some local recollections of life on the farm.

windfalls at the rate of 1¢ per Bx which my father paid me. Sometimes before it

got too dark I     might pick up 20 Bxs. Also as a teenager I made apple boxes. The rate

with shook, fill your stripper with nails and bundle your Bxs 3 to a bundle. The experienced       nailer could make 500 Bxs in 8 hours. I have pruned apple trees, thinned, sprayed, picked   apples @ 4¢ per Bx. I at around age 10 would assist in the packing shed labeling Bxs for

shipment to England….As kids there was no time to play….1

In 1935 when I was 10 my folks bought their ranch on Green Valley Road. The bulk of

Pop proceeded to remove it all to raise row crops like tomatoes, sugar beets, strawberries

it near the yellow house, took off one rear tire, strung the rear wheel with a 3 to

4 inch belt, which was attached to a 24 inch circular saw. The car was anchored in

position, put into gear, like second or third to propel the saw blade. The table was

butted up to the new saw, which when a log was placed could be pushed into the whirling

blade. I vividly recall a crew of three to four men spending about a month sawing wood

for the fireplace to use at our home. All this wood was hauled to the backyard, and

6 foot long 4 foot high and separated by small and large pieces. It also occupied my

Saturdays and boy did I look forward to Sundays….I was never so glad to see that old car
power plant leave the ranch.

The clearing [of] the land for row crops brought new chores. Pop wanted to raise tomatoes

for a cannery. So with the remainder of the backyard, I built what we called tomato

plant beds. They were about 6 feet wide and about 30 feet long. The plants for the big

field were raised from seed to individual plants for transplanting. The beds had to be

weeded, watered, covered from the sun and frost and subsequently harvested for

replanting in the ex-pear orchard.

Needless to say the work didn’t hurt me, and no doubt kept me healthy.2

When he was about 5 yrs. old, he had to lead the work horses out of the barn to water,

away and he would be in trouble), and they would fling him around in the air when they

He went barefooted and in cold mornings, he would warm his feet in the spots where

the cows had bedded down.3

when the day was done, he returned to a home where cooking was done on a wood stove

and lighting was by kerosene lamp.

If Marshall wanted to travel the seven miles into Watsonville, it took two hours with a

‘There was no way of getting to high school. It was too far, and we didn’t have any bicycles,’      said Lawrence.

with families in town during the week. The girls earned their keep by doing housework

for the families they stayed with….4

along with many of his trades, was a real good butcher also….[He] was a pretty good

blacksmith and he could repair shoes like you wouldn’t believe. And he used to be a

always grew our own stuff and we always had something to sell….There were ten kids….

everything else that a farm kid had to do. We worked in the orchard….It was Newtown

my Swiss grandfather….One of my jobs, when I was old enough, was to clean the barn,

feed and water the horses, and finally to harness them for the day’s work….Like most

farm boys in the 1930s I joined the 4-H Club and raised lambs, pigs, squash, and

pumpkins. I also entered some of my Bartlett pears and pumpkins in the Monterey

County Fair and received 1st prize for several years. The highlight of our 4-H year

was the annual camp, sponsored by U.C. Agricultural Extension, at the dormitories at

Asilomar. It was great fun and we got to meet boys and girls from other parts of Monterey         County.6

happenings of interest. A herd of cattle going by, a threshing outfit pulled by a big

horses, the six and eight-horse teams hauling sugar beets and, of course, the Gypsies

with all their dogs, kids and trading animals….

The cook house, bunk house and blacksmith shop were always good places for us kids.

The cooks, and we had all kinds from good ones to drunks, generally made hot apple

The blacksmith shop was a good place for kids to visit. We would take turns pumping

the bellows that kept the forge going. There were many different smithies over the         years…Generally they would help us kids with our projects. Just prior to planting

my father would bring in about fifty head of horses to be shod. Good and bad were

included in the bunch, but they all got homemade shoes nailed on—even though some

of them were lying on their backs all tied up….

Mom would invite town kids out at times….We would envy the Lindsey bunch because

they never wore shoes during summer, and they could run across clods and stubble. We

would generally go to the river where we had a good swimming hole. If the day was

foggy, we swam in a stagnant pool as it was warmer….7

Do these stories remind you of your own experiences, or of life as described to you by older family members, perhaps your parents or grandparents? We would like to hear the stories of your life in agriculture, and this blog will occasionally be updated with more memories.

Also, Ag History is proposing to create a permanent Living History Farm to provide ongoing experiences of past agricultural life. If you like this idea or you’d like to weigh in on this proposal, there’s still time to join a focus group at http://aghistoryproject.org/living-history-farm/. Or send your thoughts on this subject to postmaster@aghistoryproject.org.

5   John Larkin, interview by Elizabeth Schilling at Freedom, California, 16 November 1988. Larkin Valley is stated to be named for a great uncle of John Larkin. 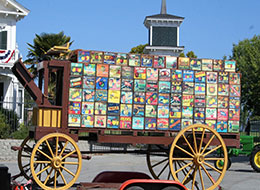 Group tours may be arranged in advance by appointment.